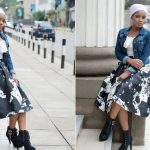 Popular Akorino model Peris Wanjiku, aka Pesh, is expecting her first child. The model has shared a photo of herself showing off her baby bump in the company of her husband. Her pregnancy appears to be at an advanced stage.

“From the moment I found out I was pregnant, I knew this would be the best journey of my life,” Pesh said.

Pesh got married to Dan (her husband) in 2021 in a private wedding that was attended by close friends and family.

In a past interview with Nairobi News Pesh revealed that they had been dating for three years before getting engaged.

“We started out as friends then after a few years, he told me that he had developed romantic feelings for me and asked me to be his girlfriend. I am so happy because he has been very supportive to me, especially my modelling career,” Pesh said.

As a model Pesh rose to the limelight for her trademark Akorino head wrap. She is also comes out as a “non-conservative” Akorino adherent.

Akorino is a religious group mainly draws its membership among the Agikuyu tribe. The word Mukurino is said to mean one who is the deliverer (Jesus).

Eric Omondi to host another comedy show in Egypt

Hopelessly in love Harmonize tattoos Kajala’s face on his leg