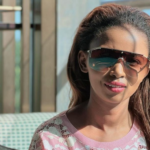 Anerlisa Muigai has refuted claims she was forced to move out of her posh home in Nairobi by auctioneers.

In a post on her Insta-stories, the businesswoman, who is the daughter of Keroche Breweries Chief Executive Tabitha Karanja,  insisted her recent relocation to Nakuru from Nairobi had nothing to do with her ordeal at the hands of auctioneers.

She also maintains the auctioneers did not cart away her households as initially reported by sections of the media.

“No Auctioneers took anything of mine and my move is nothing to do with anyone but myself. Just need to make that clear. #Donexplaininganything #Doingme,” she said.

The stance comes days after she shared videos on social media showing her moving out of her posh home in Lavington, a Nairobi suburb.

Anerlisa even shared videos of her empty parking lot, revealing that she had sold her Range Rover Velar acquired in 2019.

“I cannot believe I have to move out of my Nairobi home. I will surely miss you. #Situations.” She then said

“Also I thought I should mention… there are car dealers reselling my car. Be aware the car found a buyer. Parking is so empty,” she stated.

Last week, there were reports auctioneers has stormed her home and carted away property in a bid to recover unpaid debt.

The auction was tied to a 2018 court case in which lender Mwananchi Credit and one of its directors Dennis Mwangeka Mombo took on Muigai seeking damages for defamation.

They were aggrieved by social media posts put up by Anerlisa in which she alleged that Mombo sought to use the company to defraud her.

General damages of Sh2,500,000 were awarded to Mr. Mombo. The court found that some of Anerlisa’s statements were ‘extremely defamatory’ to him.

According to the suit paper, “She defaulted in servicing the loan leading to the institution of HCCC No. 357 of 2017 which was referred for mediation; that when the suit was pending mediation, the defendant negligently and recklessly published on social media namely her Facebook and Instagram platforms untrue allegations against the plaintiffs which were defamatory.