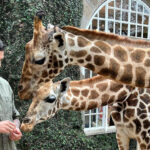 Mauro Icardi has described Kenya as a beautiful county that has offered him a unique and unforgettable experience.

The Argentine icon is on holiday in Kenya after a grueling season in the French league.

The Ligue 1 winner visited the Giraffe Manor in the outskirts of Kenya’s capital alongside his wife.

Sharing his experience his social media, Icardi said, “Today we were able to enjoy another beautiful story among animals, a story in which this ‘mansion’ called Giraffe Manor has been hiding since the 70’s and 80’s, where Jirafa Rothschild was in danger of extinction in Kenya with only a few examples of copies.”

He added, “In this ‘mansion’ it was all possible to live with them and make the giraffes feel in their habitat and be able to satisfy all their needs and help this species to multiply more and more.”

The Giraffe Centre in Nairobi is one of the favourite spots for tourists in Africa, most of whom come to feed them as they have breakfast.

Icardi is enjoying his off-season in Nairobi after a busy season with Le Parisians. He was omitted from Argentina’s squad that beat Italy 3-0 at Wembley Stadium on Wednesday in the Finalissima.

The player who made his breakthrough in the English Premier League this season, posted photos showing him relaxing on the beach in Mombasa on his Instagram page.

Kenya is one of Africa’s biggest tourist destination receiving up to 2 million visitors every year, most of whom come for business and safari.