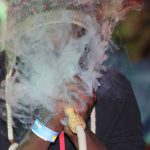 Smoking of Shisha, a practice banned by the government a few years back, is slowly making a comeback in Eldoret town.

The habit is now booming business at entertainment joints in the expansive town.

During the ban the government directed that no person shall import, manufacture, sell, offer for sale, use, advertise, promote or distribute shisha in Kenya.

But bar owners and traders continue to violate the ban.

On Tuesday, two men were charged before Principal Magistrate Mogire Onkoba for violating the ban on the use of Shisha after they were reportedly arrested consuming the substance at a bar in Langas estate.

The duo was charged with using Shisha contrary to section 169 of Public Health act of 2017.

The prosecution told the court that Emmanuel Kipng’eno and John Shituma were arrested at Edge bar at Kona area in Langas within Kapseret Sub County on the night of April 23 while smoking Shisha at the bar.

The accused pleaded guilty to contravention of the act.

They were each fined Sh10,000 or served jail terms of three months in prison.

For the past one month, more than 10 people have been arraigned in court and charged with using and smoking Shisha against the law.

Majority of the cases are from bars within Kapseret Sub County along Eldoret-Kapsabet road where most of the arrested victims are either employees of night clubs arrested while serving customers shisha.

Following the increase in cases of using shisha contrary to the law, Uasin Gishu County police commander Ayub Gitonga has directed officers in the county to intensify crackdown of those involved in the illegal business of selling and serving customers in nightclubs with Shisha.

“The law is clear that smoking and general use of shisha is illegal. Anyone found smoking or using it will be arrested and charged in a court of law, “said Mr Gitonga as he directed his officers to intensify the crackdown in all bars and clubs suspected of violating the ban on Shisha.

Since the ban, Kenya has joined Tanzania and Rwanda as countries in the region that have banned the substance.

Already the World Health Organization (WHO) in an advisory note to regulators has revealed that smoking shisha poses severe health risks as shisha smokers in a single session would inhale the smoke of 100 or more cigarettes.

According to the law, those who flout the rules will face a fine not exceedingSh50,000 or imprisonment for not more than 6 months.