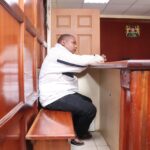 A Nairobi court has freed a man the Directorate of Criminal Investigations (DCI) accused of being involved in the murder of Samuel Mugota in Nairobi.

Dennis Gacjoki was freed by Milimani Principal Magistrate Carolyne Muthoni after no charges were preferred against him.

Gacjoki has been in custody for two weeks after the DCI released information describing him as a wanted man and a person of interest in the murder.

He had surrendered himself to Police amid suggestions he was the one who drove the getaway car used by the gunman in the gangland-style murder at Mirema estate.

But now, the prosecution says no evidence has been found linking him to the killing of the suspect who has been accused of stupifying revellers before stealing from them.

“The respondent has been cooperative and given us an easy time during the entire period of the investigations, so I’m requesting the miscellaneous file be closed, for we have not found any evidence linking him with murder,” DCI said.

Mugota was executed commando-style in broad daylight by a man who pumped half a dozen bullets in his body as he drove a car in Mirema. The man then ran into a vehicle that sped off.

Dennis is accused of drugging David Kaikai and stealing Sh 564,647 from his different bank accounts among other valuables.