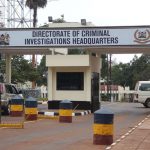 The Directorate of Criminal Investigations (DCI) has implored Kenyans to reconsider their thoughts about witchcraft.

This after a witchdoctor on Friday helped the authorities to arrest three men who are suspected to have stolen livestock  in Kakamega county.

“If you thought witchdoctors were only used to cause harm in society, you better reconsider your thoughts as a witchdoctor in Botsotso, Kakamega county, used his magical powers to track down livestock thieves and bring them to book,” DCI said in a statement.

The incident brought activities in Emusanda village to a standstill after the three men, who had been attacked by a swarm of bees emerged, carrying on their shoulders a goat and a calf, as they bleated and mooed, like the animals.

According to the DCI, the owner of the stolen livestock visited the witchdoctor after he discovered the animals were missing. The witchdoctor visited the man’s compound and conducted some rituals then left while assuring the owner that the thieves would come looking for him after two days.

Indeed the three men surrendered themselves with the stolen animals. The owner of the animals positively identified his livestock as the witchdoctor took possession of his bees before handing over the suspects to the authorities.

Witchcraft or black magic, is as popular as it is controversial even in Kenya with people claiming to be victims or beneficiaries of sorcery.

A month hardly passes before a bizarre case is reported in the media. Most of these cases involve theft, infidelity or a change of fortune.

Early this month, a court in Kisii had to adjourn the hearing of a murder case over claims of witchcraft.

This was after one of the lawyers representing the accused abruptly fell sick in a case where four elderly women were lynched last year in Marani, Kisii County, over allegations that they were witches.