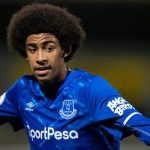 The footballer who recently made his breakthrough in the English Premier League, posted photos showing him relaxing on the beach at the Kenyan Coastal town on his Instagram page.

Onyango, born in England to a Kenyan father and English mother, joined Everton aged 8 and signed his first professional contract in July 2020, penning a three-year deal with the club.

Having consistently shone for Everton’s Under-18 team, Onyango was promoted to the Blues’ Under-23-set-up during the 2019/20 campaign.

Additionally, the 19-year-old played in seven Premier League 2 matches before the season was ended early due to the corona virus pandemic.

He turned down a chance to play for Kenya during the 2022 FIFA World Cup qualifiers despite being handed a call up by then coach Engin Firat.

Mombasa, Kenya’s second-largest city located along the coast is one of the world’s preferred tourist destinations with millions of visitors streaming in from all over the world.

Eto’o, a former Barcelona, Chelsea and Inter forward confirmed the news on his socials together with a picture with his family.