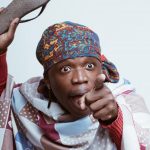 Digital content creator Flaqo Raz has broken his one-year silence with details of what he has been going through during that period. Flaqo – real name Erastus Ochieng – in a recent interview on YouTube said he decided to take a break to cater for his mental health.

In the interview, the comedian, best known by his star character name ‘Mama Otis’ said also said that he had at one point been overwhelmed by playing multiple roles on his channel.

“I don’t know whether to call it bipolar or what but I think ladies would best understand it. It’s something I have never experienced and I have never shot like that. People assume I am a pro at creating and acting these multiple characters but I am not. I learn as I go,” he said.

Flaqo also disclosed that he would cry quite a lot because he was overwhelmed with emotions.

“I am a man but I used to cry. I was so anxious and worried about what my audience thought of me. I used to compare myself with the international industry which bothered me a lot but then I came to realize that I needed to take it easy.”

The funnyman said before he went under the radar, he would shoot so many characters at once than his mind could bear at the time since he was also the brains behind the scripts.

“There’s a shoot I once did, and after I was through I had severe anxiety because I had been playing so many characters within 72 hours and I only slept (for) three hours. I switch from Mama Otis to Baba Otis, and my mind was calculating so many things at once. I was the only one playing out as I also wrote the script meaning I controlled continuity. So I was handling quite a lot at once.”

He said he reached out to Sauti Sol lead singer Bien for assistance at one point when things seemed to be getting out of hand.

“I even called Bien at the time and I would ramble on about things that didn’t even make sense. Bien gave a me a therapist’s contact. But these are things that I have been able to overcome over the past one year, because I just needed to learn how to control all these different emotions and characters.”