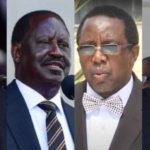 Four candidates have been cleared to contest for the presidency in the August 2022 polls.

This implies that the fifth President of Kenya will be chosen among this lot, with Odinga and Ruto considered front runners.

President Uhuru Kenyatta is ineligible to contest as he has served for two-five year terms as spelt out in the constitution.

The four-man shortlist of the successful candidates was announced by Independent Electoral and Boundaries Commission (IEBC) chairman Wafula Chebukati, who also dismissed 17 candidates who application was deemed unsuccessful owing to varied reasons.

The unsuccessful ones include former comedian Walter Mong’are alias Nyambane who incidentally had initially been cleared by the commission a few days ago.

But it turned out not to be for the man who made a name imitating fallen president Daniel arap Moi.

“As Returning Officer for the Presidential Election, upon discovery of new information about Walter Mongáre as he lacks the academic qualifications, I invited him to appear before me today at 2pm to clarify the issue but he failed to appear. I hereby invoke the nomination of Walter Mongare,” Chebukati said.
While clearing Mongáre and his running mate Rachel Dora Mwakazi, Chebukati said the commission was satisfied with their applications.
Others whose candidature was rejected include Jimi Wanjigi, Njeru Gathangu, Jeremiah Nyagah, Juliet Munyeki, Peter Mumbiko, Eliud Muthiora, Ekuro Aukot, Dorothy Kemunto, Justus Juma, George Munyotta, James Kamau, and Gibson Nganga.
Copyright © Gotchscape Entertainment.
Prev Post