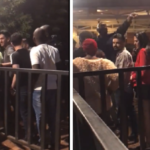 In a statement, the Nairobi County Director of Communications Beryl Okundi, said that the governor has directed for a probe into the reported incidents and a comprehensive report to be tabled in her office within five working days.

Ten employees of the popular entertainment have also been arrested for contravening licencing provisions and propagating social discrimination.

The club has been at the centre of major controversy since last weekend after a viral video emerged showing black and white patrons in different queues at the club.

On Monday, the club announced that they would shut its doors to pave way for investigations over the incident.

In a statement, the club confirmed that Nairobi city county officers had visited the joint to analyse the CCTV footage that captured the incident. The county will also be looking to determine if there has ever been a policy of discrimination at the club.

There are reports that there is a barrier put at the club to ensure black people don’t mix with whites and Indians.

But the club claims there is one main entrance to the venue that all customers entering for the first time must go through. The club, which has since apologised for the incident, however maintains that it has no segregation policy.

“To anyone who has felt aggrieved, we sincerely apologize and look forward to sitting down together and addressing these issues head-on. Since we opened our doors the Alchemist has always been a home to welcome creators, partners, musicians and customers from all different backgrounds,” the club said.

However, some members of the public claim there have been similar incidents at the club in the past.

At the same time former Nairobi governor Mike Sonko has asked the authorities to take necessary actions against the nightclub.

“It’s illegal to discriminate against Kenyans on Kenyan soil. Our freedom fighters died fighting racism. Under my administration, I will not have entertained such kind of nonsense. Otherwise, this Alchemist club in Westlands should be closed with immediate effect,” Sonko said.