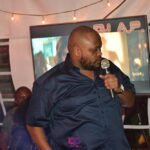 Thika Town constituency parliamentary aspirant Francis Gaitho has hit out at the Independent Electoral and Boundaries Commission (IEBC) after he was barred from contesting for the seat in the August 2022 polls on a technicality.

Gaitho who had launched a high profile campaign for the seat, was reportedly barred by IEBC returning officer, one Michael Mwose, citing his lack of a soft copy of supporters list.

Mwose also claimed Gaitho captured PDF scanned copy of documents as opposed to an excel document of list of names.

In an interview with Nairobi News, Gaitho argued the definition of “soft copy” was not captured in the list of requirements presented to candidates by the IEBC.

The frustrated aspirant also read mischief in his disqualification, saying the returning officer begun finding fault in his documents from the get-go.

The Returning Officer reportedly initially Gaitho was to first get fresh passport photos, despite the fact that his competitor David Gakuyo of the Jubilee Party presented a cropped version of his posters as his passport photo, but the returning officer admitted it nonetheless.

“IEBC had ridiculous requirements in-conjunction with political parties to lock out Independent Candidates who would have assumed the non-existent voice of opposition in various representative seats” Gaitho said.

IEBC’s preparedness ahead of the polls is also on the spotlight forcing chairman Wafula Chebukati to issue a statement defending the commission from allegations that it will not be in a position to conduct free and fair elections.

“Both of my competitors have glaring integrity issues and active cases but were still cleared by IEBC. The same IEBC has been publicly reprimanded by courts and other government agencies for clearing candidates with fake academic certificates. Why then should clerical technicalities & trivialities be used to deny Thika Town the right to decide their leaders?” posed Gaitho.

Gaitho adds that Kenyans will continue being presented individuals of questionable character as the only options in the political arena if IEBC is allowed to continue crafting  what he says are suspicious last-minute regulations like the ones imposed on independent candidates.

Gaitho is the latest in a list of growing candidates who have been blocked from contesting by IEBC, with the most prominent being presidential aspirant Mwangi Wa Iria, who also accused the Electoral body of bias.

Matiang’i: My biggest achievement is having Kenyans get passports in a day