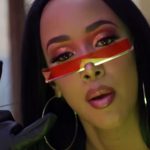 A year-plus since parting ways with Tanzanian singer Diamond Platnumz, Kenyan songbird Tanasha Donna has refused to be drawn into reports she is dating Nigerian musician Omah Lay.

When recently confronted by the media to state her stance, Donna, also a beauty influencer chose to remain mum on the extent of her supposed relationship with the Damn cronner.

This follows an array of photos shared online of the two musicians spending quality time together.

“Not today darling,” she responded on the sidelines the Fenty Beauty launch in Nairobi.

The singer then walked away before journalists could ask more questions.

Meanwhile, Donna says she’s been working round the clock on a personal project, a new EP dubbed This Is Me, which will be launched in July.

“I’m working on a project, one that I have been working on for a year and a quarter now. Actually starting from July, there’s going to be lots of releases. I don’t want to say much, I know my fans have been impatiently waiting but it’s going to be worth it.”

She described the new EP as a way she choose to really express her experiences.

“The name of the EP is This Is Me. It’s basically me expressing myself through my music for the first time. So it’s a very big step for me and I can’t wait for my fans to hear it,”

Tanasha Donna has steadily built her name as one of the fastest-rising female artists on the Kenyan music scene.

Her music career has been characterized by collaborations with a number of well-known African musicians.

The release that got many music lovers tuning to her hits is her 2019 single dubbed Radio featuring Barak Jacuzzi.

The track was then followed by a collaboration with her baby daddy come popular Tanzanian singer Diamond Platinumz on a club banger, Gere.

The song introduced her to the wider African audience, hence thrusting her further into the music limelight.