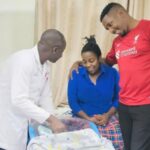 Matubia, who starred in the Mother-in-law television series, announced the arrival of her baby on social media. She also thanked God for safe delivery.

The couple also shared a photo with their newborn from the hospital saying and described it as an interesting delivery.

“My baby D, Blessing we did good,” Matubia captioned a picture of herself carrying her bundle of joy.

“Good Morning ☺️Great news!!! Baby is finally here!!! We give thanks to God for a safe delivery… DR. Nyamu and the staff of @komarockmodern Thank you. This was one interesting delivery so watu wangu wa YouTube the video will be up very soon so subscribe and hit the notifications bell… Thank you, fam for your prayers. Blessed Monday!”

The actress has said in an earlier interview she learnt she was expectant after eight weeks.

“That day I wasn’t feeling well. I even thought I had contracted Covid-19,” she said.

“I had no appetite, and his cologne was irritating me. I was at a point where I never thought I could be pregnant again.”

Matubia was tested for different things, among them pregnancy.

“Between my last period and the time of conception, when I was getting pregnant, I was on family planning — an injection,” she said.

“The doctor told me I was eight weeks pregnant, I froze. I did not know whether to laugh, cry or shout. This second pregnancy, I wasn’t ready because our relationship was just in the ‘honeymoon’ period.”

Matubia added that she was taking time for her man before they thought of getting another child.

“I went to the car and cried for 30 minutes. I then called Blessing (Madiba) over the phone and he was very excited,” she said.