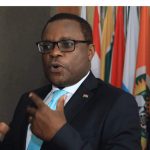 Ken Lusaka is in with a shout to reclaim the Bungoma gubernatorial seat ahead of the August 2022 polls.

As per a poll conducted by Mizani Africa, Lusaka has amassed a 53.6 percent rating among the respondents.

He is closely followed by incumbent Wycliffe Wangamati who has 43%.

Lusaka served as the area governor between 2013 and 2017 before Wangatami beat him in the 2017 polls.

He has since served as the Senate speaker and is not looking to reclaim his position.

Wangamati has since switched political parties and will be seeking to defend his seat on a DAP-Kenya ticket after ditching Ford-Kenya.

Lusaka too is gunning for the seat on a Ford-Kenya ticket after quitting Jubilee and severing political ties with President Uhuru Kenyatta in favour of his Deputy William Ruto.

Bungoma is known to be a stronghold of Ford Kenya party leader Moses Wetangula who is gunning for a the third term as area Senator.