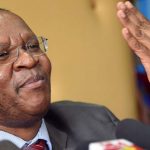 Interior Principal Secretary Karanja Kibicho asserts that Raila Odinga will win the August 9 presidential elections by over 60% of the votes cast.

“National Intelligence Service data shows that the Raila-Karua ticket will win by 60% of the presidential votes in the 1st round,” said Kibicho in a television interview.

“If you ask me what the data says, and because you are entitled to my answer as a public servant, I will give you as it is then the burden of proof shifts to you.”

Raila Odinga, a seasoned politician is, alongside William Ruto, considered among the favourites to succeed President Uhuru Kenyatta ahead of the August 2022 polls.

“The rest of the presidential candidates will share the 40%,” explained Kibicho

Kibicho, considered among the most powerful civil servants in retiring President Uhuru Kenyatta’s regime, also responded to his critics who his says keep reminding him he will soon leave office.

The powerful PS has been the target of attacks from Deputy President William Ruto’s lieutenants, led by lawmakers Kimani Ichungwa, Ndindi Nyoro and blogger Dennis Itumbi.

He has been accused of several things, including frustrating the DP’s march to State House.

“I read social media and everytime I hear people saying I have less than two months left in office,” he observed.

“I’m prepared to leave because by law we have to leave. You too, (pointing at the TV presenter) will one day leave office. They (my critics) will also leave what they are doing.”

Kibicho also deliberated on plans to hand over power from President Uhuru Kenyatta to the person who will be elected Kenya’s fifth president in the August 9 elections.

“In our ministry we have a committee that is preparing a handing over report that is going across the country,” he offered.

Adding that the ministry he serves is the only one that has representation in every village in the country, Kibicho noted, “We want to tell to incoming government about every village so that we don’t reinvent the wheel when we are able to give you a head start.”

However, Kibicho noted that it is upon the next leader to determine whether the report is of use or not.