Making Money from Your Recorded Music | How Do Musicians Make Money in 2022 ?

Making Money from Your Recorded Music | How Do Musicians Make Money in 2022 ?

ROYALTIES EARNED BY YOUR SONGS

When you a write a song, it has the potential to be streamed, downloaded, printed, sampled, pressed, transmitted, re-transmitted, broadcast, re-broadcast and performed live. Basically, your music can be used in any which way possible, globally.
That’s a lot of revenue to track that requires a global infrastructure to monitor.
One basic rule of thumb: the more people that hear your music, the more money it makes and the harder it becomes to track. 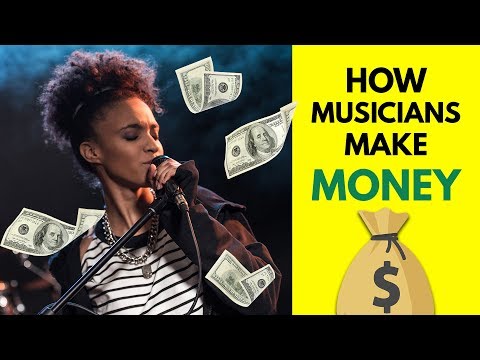 With Gotchscape Distribution, we ensure your songs are registered globally to make sure every single cent that is owed to you is collected. To help you better understand how your music makes money, here is a list of the different royalties and potential revenue sources for your songs.
A mechanical royalty is earned through the reproduction of copyrighted works in digital and physical formats. Songwriters are paid mechanical royalties per song sold, downloaded, and streamed via “on-demand” streaming services.
Major music platforms pay mechanical royalties for streams, sales, and downloads to mechanical right collection societies.
Most countries have their own mechanical rights society and any mechanical royalties generated in that region are paid to the local society.
Gotchscape Music Publishing can claim and pay out all the mechanical royalties you’re owed.
If you’re not already receiving mechanical royalties, then you’re missing out! Every single stream or download generates these additional payments, so make sure you’re not leaving the money you deserve on the table.
Learn more and sign up to Gotchscape Distribution here.
The PROs issue a blanket license to any entity who wishes to use their songs. A blanket license grants the music user wishing to license music the right to use any song from the catalog of the associated PRO for the duration of the license. The PRO then tracks the usage of the songs and pays through the royalties due from the performance of those songs.
Print royalties are derived, as the name suggests, from the sale of printed music materials. Lyrics, musical notation, and music tablature all constitute print royalty. When companies create sheet music or company print t-shirts with lyrics on them, they are required to pay a print royalty.
There’s no government rate set worldwide, and the rate is typically a fee for a specific period of time, and/or a percentage of the site’s gross revenue from paid subscriptions or advertising. Gotchscape Publishing Administration has a team of experienced licensing professionals working to maximize the value of your catalog. Examples of print royalties are as follows:
Sync refers to the synchronization of music with a moving image and typically payment takes form in a one-time fee which grants the licensee the right to “sync” their composition with a moving image.
There is no set rate and determining what an appropriate amount is takes form in a negotiation between the interested parties.
There are multiple variables to consider when negotiating a sync fee: the type of media; how the music is being used (is it a theme, end credit, background instrumental?); the length or portion of the music being used; how integral the music is to the scene in which its being used; and if the song also being used for marketing (i.e. in a trailer/promo as well as the production).
Gotchscape Publishing Administration has an experienced sync team who are able to negotiate these deals on your behalf ensuring the value for your songs is maximized.
Sync deals can be negotiated for the following:

Note: Micro-Sync is an important revenue source derived from platforms such as YouTube, Facebook and Tik Tok.

Essentially, it’s the same concept as licensing for film/TV –  the synchronization of music to a moving image – but on a much larger scale. Micro-sync is specifically referring to the mass use of music in User Generated Content.  It is very important to note that a micro-sync revenue on a platform such as YouTube generates both mechanical and performance royalties.

How to Get Verified on Spotify in 2022

Top Music : Hello My Name is…

Top Music : Hello My Name is…