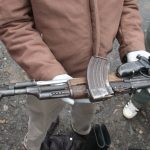 A man escaped death by a whisker when a suspected robber armed with a rifle threatened to end his life if he would not give him money.

Mr Irungu Mwangi, 55, was on his way home when the lone gunman confronted him and demanded he gives him more than Sh200 that he had already handed him.

A statement by the Directorate of Criminal Investigations (DCI) revealed that Mr Irungu was cornered by the gunman at Chaka Market.

However, the hunter became the hunted when he dropped the gun with the aim of ransacking him and it is then that Mr Mwangi swiftly wrestled him to the ground.

“In a classical case of the hunter becoming the hunted, Irungu Mwangi shocked Chaka market residents by his sheer display of bravado, after wrestling down the assailant and snatching the firearm from him,” the statement read in part.

The incident happened at 8pm on Tuesday, June 7, outside Chaka Primary School.

It did not take Mr Mwangi long before he took the gun and threatened to end the life of the robber.

This is after he had fought him to the ground and even grabbed the firearm after a brief scuffle.

According to the statement, the robber was lucky because the civilian did not understand “the working mechanism of the firearm and as he fumbled on how to chamber a round and fire, the attacker disappeared into the darkness,”

Police officers were called to the scene where it was established the firearm which had a magazine loaded with 15 rounds of ammunition was stolen from Naruita police station in Kieni West Sub-County.

“Also recovered at the scene of the scuffle was a police beret belonging to the Administration Police Service,” the report revealed.

Police have already launched a manhunt for the suspect who remains at large.