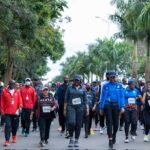 First Lady Margaret Kenyatta at the weekend joined thousands of runners for the 17th annual Kigali International Marathon in Rwanda.

The First Lady, who was in Kigali at the invitation of her Rwandan counterpart Mrs Jeanette Kagame, participated in the 10km segment of the road race that attracted several big-name athletes including Mo Farah.

Other notable winners were Rwandan Adeline Musabyeyezu and Burundian Nimbona Elvanie of Burundi who won bronze and silver medals respectively in the half marathon.

Kigali International Peace Marathon, an annual athletics event, was launched in 2005 as an amateur race aimed at using sports in the healing and reconciliation process following the 1994 Rwandan genocide.

The First Lady has used athletes to influence the world on a number of projects including maternal health care.

She formed the Beyond Zero, an annual marathon in Nairobi and once competed in the London marathon.

Proceeds from these races were channeled towards distributing mobile clinics in all the 47 counties to ensure women do not suffer complications while giving birth.

My Teenage Daughter Was Stressed Before She Mysteriously Went Missing