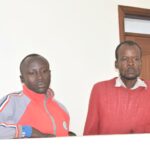 Two mechanics were charged with stealing Sh100, 000 from a client’s car at a garage in Wilson Airport in Nairobi.

The two are Caleb Maua Kiche and Stanley Omondi.

They are accused of jointly stealing the cash from Wilberforce Juma on June 3.

Juma is said to have taken his car to the garage for repair and informed Kiche that there was some money therefore not to allow anyone near the car.

The car was returned to him later and he found it not to have been properly fixed.

He checked and found the cash missing and he proceeded to the workshop where he found his mechanic missing from the garage. Kiche later returned to the garage after Njuma called him.

Kiche accompanied Njuma to a police station the complainant reported to the police and Kiche was immediately arrested.

He claimed to have worked on the car jointly with Omondi who had also left and switched off his phone. Omondi was later traced and arrested.

They denied the charges before resident magistrate Jackline Onjwang.

They were released on a bond of Sh200, 000 and an alternative cash bail of a similar amount.

The case will be mentioned on June 21 for a pre-trial and fixing of hearing dates.