Mike Sonko hits out at Alchemist club amid racism claims

Mike Sonko hits out at Alchemist club amid racism claims 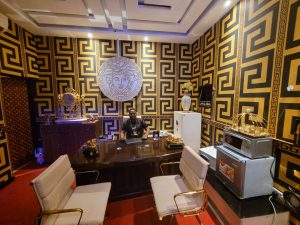 Mike Sonko has hit out at the management of an entertainment club in Nairobi accused of racism.

The flamboyant politician, who is gunning for the Mombasa gubernatorial seat, has also asked authorities to take necessary actions against the nightclub.

“It’s illegal to discriminate against Kenyans on Kenyan soil. Our freedom fighters died fighting racism. Under my administration, I will not have entertained such kind of nonsense. Otherwise, this Alchemist club in Westlands should be closed with immediate effect,” said Sonko, who is known to own a number of entertainment joints in Nairobi and Mombasa.

Earlier on, the management of the said club denied it was involved in racism arguing the video shared on the internet was not a depiction of what happened.

“There was a group of customers who stepped out and were re-entering the venue,” it explained.

“The security allowed them to come in through the exit line in order not to clog about the main entrance. The video that was shared by a private individual made it appear that another customer was denied entry – that’s simply not true.”

While explaining themselves, the club management added, “The line is composed of people of all different backgrounds. We have never had a policy of segregating lines.”

Soon after the video leaked showing blacks and whites lining up to join the entertainment joints in different queues, Alchemist apologized saying, “To anyone who has felt aggrieved we sincerely apologize and look forward to sitting down together and addressing these issues head-on.”

Adding that they have never discriminated against people, the management added, “Since we opened our doors the Alchemist has always been a home to welcome creators, partners, musicians, and customers from all different backgrounds.”

The management has since offered to a roundtable meeting to discuss the issues raised in a move that appears to not have satisfied Kenyans on Twitter (KOT).