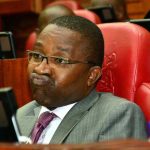 Murang’a governor Mwangi wa Iria caused a scene outside the Independent Electoral and Boundaries Commission (IEBC) while accusing the officials of attempting to bar him from the presidential race.

wa Iria, who is hoping to vie on the Usawa Kwa Wote party, also accused the Electoral body of reducing the number of presidential candidates in the race.

35 candidates have expressed interest in succeeding President Uhuru Kenyatta ahead of the August 2022 polls.

The governor wondered why his name had been omitted from the list of those contesting.

“I was not given any reasons to why they removed my name, I have heard they had a meeting while trying to create a reason, and they send an officer to tell me privately,” he claimed.

“My personal thinking is that when we bring signatures here some people are selling them because there is no way you can accept my documents, you don’t give me feedback and then seven days later when I inquire, you send people to me informally.”

He further accused the commission of using unofficial channels to communicate with him.

“Even people who failed to meet requirements are in the schedule but my name has been removed. No election will be conducted if I will not contest,” he said.

As his supporters chanted “No Wa Iria, no election”, the Murang’a county boss insisted he had met all the requirements, including bringing signatures from supporters in 24 counties as required and the commission even acknowledged receipt.

“They have deliberately removed my name today and now they are looking for an excuse,”