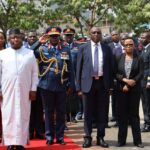 He died in 1978 and was laid to rest next to Parliament buildings.

Visiting heads of state occasionally visit his graveside to pay their last respects and are normally accompanied by the two Speakers.

But this was not the case as Muturi and Lusaka were missing in action despite being present at past events including when deceased Tanzanian president John Pombe Magufuli and his successor Suluhu Hassan visited the mausoleum.

No laws compel Lusaka and Muturi to attend this event even though their absence was loud.

Their unavailability comes at a time the two political leaders have severed ties with President Uhuru Kenyatta in favour of Deputy President William Ruto, two months to the August 2022 polls.

Earlier, the visiting president and the First Lady who are on a two-day tour of the country visited State House Nairobi, where they met President Kenyatta and First Lady Margaret. He inspected a guard of honour mounted in his favour.

The DP was again missing in action.

A statement from State house indicates the two leaders signed among other, an agreement on the Establishment of a Joint Commission for Cooperation and Memorandum of Understanding on Political and Diplomatic Consultations plus on Trade and Investment.

Mariga Attacked In Kibra During Campaigns