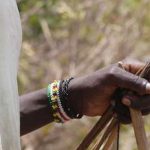 Police in Nakuru have arrested four suspects who were found in possession of 25 arrows.

The four were nabbed after police spotted an image on social media where the suspects were wielding crude weapons.

A statement shared by the National Police Service revealed the four “proudly paraded their crude weapons, without regard to security concerns in their neighbourhoods.”

“In efforts to sustain an enabling environment for peaceful coexistence towards and beyond the General Elections, the National Police Service has deployed several measures including scrutiny of activities by users on social media platforms to curb triggers to violence and insecurity,” the statement reads in part.

The suspects are in custody and the recovered arrows kept as exhibits.

The four will be arraigned in court on Monday.

The statement further asked Kenyans to use social medial platforms responsibly and to desist from acts that would trigger violence and other criminal activities in their localities.