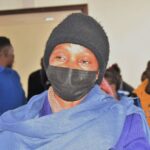 An aspirant for the Member County Assembly (MCA) seat in the August 2022 polls who is alleged to have conned an elderly man of Sh840,000 while promising to facilitate his relatives and friends to attend an international conference in the USA has been charged with obtaining money by false pretenses.

At Kibera law courts, Martha Wangari Kamau was charged with obtaining the money from Harrison Mungai, 85, on diverse dates between February 22 and April 22, 2022, with intent to defraud, contrary to section 313 of the penal code.

She is accused of receiving the money by falsely pretending she could facilitate Mungai’s team comprising of relatives and family friends to attend the conference, a fact she knew to be false.

Ms Kamau who the court heard is vying for the MCA seat in Ndaragwa ward in Nyandarua is said to have met Mr. Mungai and his grandson within Nairobi’s Central Business District (CBD).

She claimed to have been requested to facilitate about a dozen people to attend a conference in USA and asked them to get ready with cash.

She asked them to get Sh140, 000 each to facilitate their travel to the US to attend the one month conference between April 1 and 30.

The amount was for accommodation, food and drinks for a month and the complainants were to get air tickets separately.

Mr Mungai shared the information regarding Ms. Kamau’s offer with relatives and friends who got interested and contributed the money which they gave to him before he transferred the same to Ms. Kamau via Mpesa on different dates in different amounts.

The case will be mentioned on June 21 for a pre-trial and fixing of hearing dates.