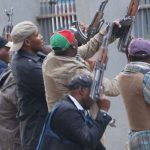 Police have arrested nine robbery with violence suspects who include four women.

In a statement, the Directorate of Criminal Investigations (DCI) say the suspects conducted the alleged crime robberies on diverse dates between May 18 and May 27.

“The thugs were cornered within Kamae and Lineka areas of Kasarani following a stealth operation mounted by Detectives based at DCI Nairobi area,” the statement read in part.

Detectives were forced go take up the matter after a series of robberies conducted in a similar modus operandi were reported in different police stations.

The detectives wet through crime reports that we’re made in the counties of Nyeri, Laikipia, Kirinyaga, Embu and Nakuru.

They engaged officers attached to the elite Crime Research and Intelligence Bureau which led to the arrest of the nine who were smoked out of their hideout within Kasarani Sub-County. The officers conducted a raid at the house attracting a huge crowd as they made the arrests.

This comes just a day after a robbery with violence suspect was shot dead in the city leading to the recovery of one firearm. The deceased was among four other robbers who attacked and stole from a civilian who reported the matter to the police.

“The reportee, suffered double tragedy as he staggered from his local situated along Juja road at around 2am, after he threw caution into the wind and decided to walk home oblivious of the dangers that lurked in the darkness,” the DCI said.

The police also impounded a motorcycle of registration number KMEP 524C which was used by the thugs.