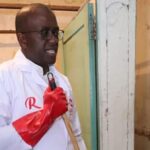 Polycarp Igathe has been spotted cleaning toilets in Nairobi as he steps up campaigns to be elected Nairobi governor.

The general hygiene of these washrooms has been questioned in the recent past.

“The management of public toilets should be transparent, fair, and effective,” he said.

“There should be more public toilets in market areas, bus stops, and the Central Business District (CBD) so that we protect the sanitation of the people and the environment.”

Formerly Nairobi’s Deputy Governor, Igathe has in the recent past been spotted performing different roles, a move he says will help him understand the challenges faced by the Nairobian.

These include riding in a public transport vehicle (matatu), on a donkey, cooking, eating at ‘low-end’ restaurants, serving beer at a pub, buying bananas from street vendors, and reading news on NTV.

Igathe who is, alongside Johnson Sakaja, considered frontrunners in the race to replace Ann Kananu, has also promised his government to ensure his office teams up with the national government to provide incentives to property owners who invest in water harvesting so as to increase the amount of water collected in Nairobi.

Other pledges he’s made include creating a land policy that allows sharing of spaces for people to work in.

“We will also look into the formal acquisition of land and formal expansion of trade spaces within the various wards so that women and youth can set up businesses and earn a living.”

He has also undertaken to construct market places for small-scale traders.