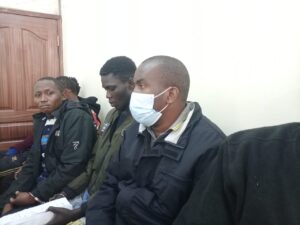 A property agent has been charged in court with theft of more than Sh2 million he collected as rent from tenants over the last four years.

The accused, James Peter Muthoga Mureke, however denied stealing the money on diverse dates between June 2, 2018 and May 26, 2022.

The prosecution told the Milimani Law Court how the accused stole the money at Karen Triangle Mall along Karen Road.

Mr Mureke was an employee of Tweya Investment Limited when he allegedly received the money from several tenants in the establishment.

The accused was the assistant manager, managing estates within Rongai, Karen and Kitengela.

The court was told that the accused would collect rent but fail to remit to the company.

Senior Principal Magistrate Elekata Riany freed the accused on bond, with the hearing date of the case set for June 22, 2022.

House help in court for theft of Sh500k ring