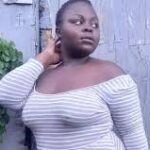 It seems it is going to take more than just a public show of affection to win over singer Stivo Simple Boy’s ex-girlfriend Pritty Vishy.

This is after a city man decided to pour his heart out to her by writing his intentions on a placard and stand at the busy Tom Mboya walk near the National Archives to try and capture her attention.

“I want a man who drives please this no,” responded Pritty Vishy.

The rebuttal comes a few days after the content creator explained her dowry will be no less than Sh2 million.

Vishy used to date singer Stivo Simple Boy but later broke up. She recently revealed the reason behind the breakup saying that she was not attracted to him and that is why she cheated.

“We were boyfriend and girlfriend and he had even introduced me to his family, but it was not a romantic relationship. He was never attractive to me. I won’t lie. And that’s the reason I was cheating. Stivo was a good man, yes he was kind and humble but he was not attractive,” Vishy said.

The content creator further said she never shared any form of intimacy with the singer. Vishy, also stated that she did not feel bad about how things turned out between her and Stivo, and neither does she regret her actions.