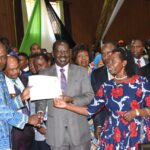 Raila Odinga and Martha Karua have been cleared by Independent Electoral and Boundary Commission (IEBC) to vie for the presidency in the August 2022 polls.

The duo, which is conducting under the Azimio la Umoja- One Kenya coalition, were cleared by IEBC chairman Wafula Chebukati,  who assured Kenyans of a free and fair election.

“The commission is focused on giving Kenyans a free, fair and credible election and that is what we have been preparing for since the last election. My team and I have done what we think needs to be done to give Kenyans what they deserve,” said Chebukati.

In his address after the clearance process, Mr Odinga expressed confidence that IEBC has the capacity to conduct free and fair elections.

He however called the IEBC board to comply with its rules and ensure that they conduct a free and fair election.

“Live by the script and do what Kenyans expect you to do,” he said.

Mr Odinga also promised his coalition will conduct itself in a way that complies with the IEBC rules.

He also expressed his satisfaction with the way the media has handled the coverage of the political season and asked Kenyans to conduct themselves peacefully before, during and after the election.

Odinga also expressed concern that his billboards had been defaced in some area by his perceived opponents.

“There will be winners and losers in the coming election but we still need one another after the election,” added Mr Odinga.

Other candidates cleared to contest for the presidency are Deputy President William Ruto of the Kenya Kwanza coalition, George Wajackoyah of Roots party, David Mwaure Waihiga of Agano party, and Walter Mongare of Umoja Summit Party