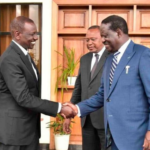 William Ruto and Raila Odinga have publicly differed on Twitter over a policy by Odinga to empower local clothes manufacturers at the expense of importing the finished products.

Odinga had at the launch of his manifesto suggested he will discourage the importation of mitumba (second-hand) clothes.

He said: “Cotton was being grown in large numbers in our country. So many parts of the country use cotton it is the only available cash crop. Our textile industry was killed through liberalization and then they brought in mitumba it killed all our textile industries. Our people are wearing clothes coming from outside the country they’ve been worn by people who are dead.”

Trickle down is dangerous. They branded business people's merchandise counterfeit & destroyed them. Now clothing enterprises are dealers in dead-people's wares to be banned. BOTTOM UP,using TVET will assist these enterprises grow from sewing,cottage to textile & leather industry.

In an instant rebuttal, Raila posted a video of Ruto suggesting an earlier similar ban of mitumba.

Odinga and Ruto are considered among the frontrunners to succeed President Uhuru Kenyatta ahead of the August 2022 polls.