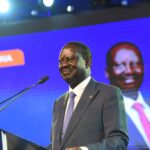 Raila Odinga has caused an uproar on social media by suggesting mitumba (second-hand) clothes are those that have been used by dead people.

Odinga, who is contesting to succeed President Uhuru Kenyatta ahead of the August 2022 polls, spoke during the unveiling of his manifesto.

He also pledged to revive the growth of cotton in the country.

“Cotton was being grown in large numbers in our country,” said Odinga.

“So many parts of the country use cotton as it is the only available cash crop. Our textile industry was killed through liberalization and then they brought in mitumba it killed all our textile industries. Our people are wearing clothes coming from outside the country that has been used by the dead.”

These comments have elicited mixed reactions.

One user linked the comments to the frequent fires witnessed at Gikomba market in Nairobi.

Gikomba is the biggest market in Nairobi.

I have been wondering why does GIKOMBA burn every now and then…Kumbe Kuna watu who wants hustlers out of it Saying MITUMBA is for the dead people. 😭RAILA ODINGA will never be president#Everyhustlematters

Mitumba should be BANNED. No country that wants to industrialise that commits to allowing Mitumba. Mitumba ni aibu. Even William Ruto has promised to promote local than import Mitumba. Kenya Kwanza supporters waache kutupima akili. No right thinking leader will allow mitumba!

Another echoed Raila’s words saying mitumba clothes were a havoc to the textile industry.

Mitumba is a disaster on Kenya's textile industry and also a conduit for ridding the west of its unrecycled waste. Ask Kagame why be banned mitumba in Rwanda despite threats from US.

Another one felt Raila had lost touch with reality as mitumba employs many Kenyans.

If we reason like Raila that Mitumba killed our local industries, then who are we going to hold responsible for the collapse of KCC, KQ, Mumias & the rest?

Mitumba industry employs thousands of Kenyans and dresses millions of us. Again, the old man is out of touch with reality

Another user felt that mitumba was the reason for the failed textile industry.

Very brave that Raila Odinga touched a raw nerve: Mitumba. When Rwanda banned Mitumba in 2018, it fell out with the US government. They forfeited AGOA for their dignity. Let's revive our textile industries by looking at the demands of the market. EAC is a BIG market for us.

Another one questioned whether Raila knew the number of people whose livelihood was on mitumba.

Raila Odinga has promised to ban mitumba clothes; he says they are for dead people. Does this man know how many families are surviving on mitumba business? We can not all work in offices. Avoid this man like a plague.

Another user asked if the Sh6,000 Raila is promising to give would afford to buy clothes from high-end stores.

Raila says he will ban mitumba yet his plan to tackle poverty is a 6k handout. How many clothes can one buy with 6k at Mr Price?

Another one felt his comment on mitumba has caused a shift on his votes come August 9th.

Hahahaha ,Raila's comment on Mitumba has cut his votes to zero in the target population dealing with mitumba business. That was very reckless

Another user felt Raila’s speech did not touch on what was actually ailing Kenyans.