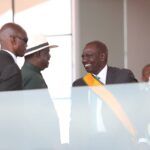 Deputy President William Ruto was missing in action at a function where President Uhuru Kenyatta hosted his Cabinet at State House, Nairobi.

The event was held just before the Head of State and the First Lady departed for Uhuru Gardens to lead Kenyans in celebrations for what will likely be his last Madaraka Day as the country’s Commander in Chief.

However, the DP was already at Uhuru Gardens with his wife Rachel, ready to receive the President Kenyatta.

“It will be my last Madaraka Day as President, and I want to take this opportunity to thank each one of you. We have worked well together. It has been a pleasure and honour to have you with us. And I am confident that we have a firm foundation for those who will come after us to continue to build a bigger, brighter, and prosperous Kenya from where we have left off,” said Uhuru at the State House event.

Reached for comment, Ruto’s aide Emmanuel Talam, explained that he was not invited.

Ruto’s absence is just the latest in an ongoing public spat between President Uhuru Kenyatta and his Deputy.

As a result, the DP has missed out on several occasions at State House.

The DP has also claimed to have been denied administrative responsibilities he says were offered to Interior Cabinet Secretary Fred Matiang’i.