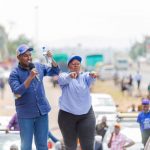 Sabina Chege has asked Raila Odinga supporters to abstain from sex on the eve of the August 2022 polls.

The Murang’a Women Representative spoke in Nakuru during a mammoth political rally aimed at drumming up support for Odinga.

“I am impressed with the support here but we have to go and vote for this numbers to count,” she explained.

“On voting day, we will come up in huge numbers. We will wake up early because we will suspend all duties at night to be ready for the day,” she added amid cheers.

A famed radio presenter and video vixen in her hey dey, Chege has served as Muranga Women Rep for the past ten years and was among nominees to be Odinga’s running mate.

She has evolved as Odinga’s biggest supporter and point person in Central Kenya.

Odinga was on Sunday cleared by the Independent Electoral and Boundaries Commission (IEBC) to contest for the presidency for the fifth time.

Sonford fish and chips back like it never left

How South Africa President hid Sh469 million ‘under the mattress’