Teenage thief asks court to ‘get saved’ before going to prison

Teenage thief asks court to ‘get saved’ before going to prison 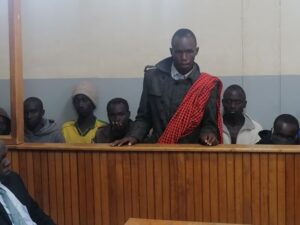 A teenager charged with stealing electronic equipment from an Eldoret church has pleaded with the court to allow him to seek forgiveness from the church before being sentenced.

John Kiiru who pleaded guilty to the offence of breaking into the church and stealing holy musical equipment told the court he wanted to meet the church pastor and members to seek forgiveness and get saved before going to jail.

Kiiru hopes to use his jail term to preach to other inmates after being converted to become ‘a born again Christian’.

The value of the stolen equipment which was recovered from his house was not established.

Before stealing the equipment he was a casual laborer at the church situated in Bondeni area within Kamukunji estate in Eldoret town.

The charge sheet stated that on May 31, 2022, at Bondeni area in Soy Sub County within Uasin Gishu County willfully and unlawfully broke into KAG Shilo Prayer House and stole a power mixer, speaker among other church Musical instruments.

After pleading guilty before Eldoret Chief Magistrate Dennis Mikoyan, he made a passionate appeal to the court to help him access the church leadership so as to ask for forgiveness before being sentenced.

“I am very remorseful of what I did, I kindly request this court to help me reach the church pastor and other leaders to ask for forgiveness before being sentenced,” he told the court during mitigation.

The church pastor John Kiarie who is prosecution’s key witness has said that he is ready to forgive the accused on the behalf of the church.

“I have no issues with his request for forgiveness, I hope to meet him before sentencing so as to pray for him and lead him into salvation as he wishes,” said Pastor Kiarie.

The case will be mentioned on June 27 for a probation report to determine the kind of sentence that the court will prefer against the accused.