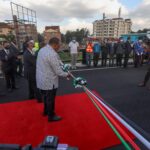 The new flyover was constructed by Spanish engineering company CENTUNION which begun works in November 2020, aimed at reducing traffic.

The roads leads to several residential areas including Lang’ata and Karen, the Wilson airport, army barracks and national park.

“The project is being implemented under the EPC/Turnkey Contract framework and was signed between KeNHA and the Contractor, M/s CENTUNION Espanola de Coordinacion Tecnica Y Financiera, S.A of Spain at Contract Sum of EUR 23,250,000,” said Kenha then.

Other projects being implemented include the construction of footbridges across Mbagathi Way and Nyayo stadium and are set to be completed by 2024.

The project consists of the upgrading of Lang’ata-Mbagathi-Mai Mahiu crossing by means of a four-lane flyover on Lang’ata Road, and the expansion of the adjacent roads.

The project will also comprise the construction of a footbridge on the Mbagathi Way side.

The flyover will allow vehicles headed to Ongata Rongai and Magadi to pass over an elevated road to the Shell Petrol Station next to the Wilson Airport.

Vehicles headed to Mbagathi Road, South C, Wilson Airport will use the underpass in a move that is intended to end traffic jams along the busy Lang’ata Road.