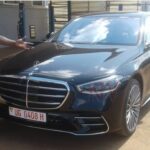 Uganda has reportedly spent UGX2.4 billion (about Sh75 million) to purchase two state-of-the-art vehicles for the new Speaker of Parliament, in a move that has attracted varied reactions.

The state bought the cars, two Mercedes Benz s500 from the United Kingdom for Speaker Anita Among and her Deputy Thomas Tayebwa.

🚨PHOTOS: This is one of the two Mercedes Benz S500 cars that parliament procured from the United Kingdom (UK) for speaker of @Parliament_Ug Anita Among and her Deputy Thomas Tayebwa. The second vehicle is expected in the country before the end of the week #NTVNews

The purchase comes amid protests by the opposition over the high cost of living in the country.

Nairobi News understands a litre of fuel is currently trading at an estimated Sh200 in Kampala, Sh45 more than the same commodity costs in Nairobi.

The new Speaker recently took office following the death of his predecessor Jacob Olunyah while undergoing treatment in the US.

Here are some of the views by Ugandans on Twitter.

John feels Ugandans are taxed heavily so as to make the lives of a few comfortable.

As common duty prices go high government expenditure on non value items and making a few comfortable. Now I can relate what @kizzabesigye1 said “govt has enough money to bring the prices down in a blink of an eye” https://t.co/PTz0T8siyP

John Nsimbe suggests the Ugandan government needs to think of the common mwananchi.

Our leaders need to think about us the common people, and how much we deny ourselves to survive through the jungle of life. To live this large at our expense, using tax payers money at this difficult economic time appears insensitive. When is @GovUganda frugal?😮 https://t.co/n23vMmI47q

Except for greed, why would a good leader want to drive around in a Shs. 1.4B car in a very poor country like Uganda? We can't even manage simple things like keeping street kids off the streets. https://t.co/gJwIeSt4zN

David Tycoon questions why the Ugandan government did not buy locally made cars.

It's very absurd & unfortunate that @GovUganda @Parliament_Ug have quickly forgotten #BuyUgandaBuildUganda …Rather than promoting @KiiraMotors , you still can afford to procure expensive brands from abroad! Leaders should be examples in this..when will you ever promote your own https://t.co/lWn7Wj0gTe

Hannington claims the government should have improved healthcare instead of splashing money on cars.

No medicine in all regional referral hospitals and you acquiring a liability to show among your family members.

The country is in a sorry state economically where there is high skill rocketing taxes and inflation but as an elder you want to show off with expensive vehicles and will us youngsters do .
Pass bye all old port bell road it's all looking like …. I don't know .jesus.

Gambler who stole phone at a casino jailed for four months