US calls for free, fair election in Kenya

US calls for free, fair election in Kenya 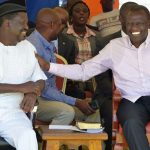 The US government has welcomed the steps that are being taken by the Independent Electoral and Boundaries Commission (IEBC) in preparations for the August 9 elections.

In a statement, US Secretary of State Secretary Antony Blinken said his country will stand with Kenyans in support of free, fair and peaceful elections.

“We welcome IEBC’s certification of candidates for Kenya’s August 9 General Election and the beginning of the electoral campaign. As I said to Kenyan Cabinet Secretary (Raychelle) Omamo last month, the United States stands with Kenyans in support of free, fair, and peaceful elections,” Blinken said.

This comes amid claims from Deputy President William Ruto’s Kenya Kwanza Alliance that there are plans to rig the presidential elections in favour of Azimio la Umoja flag bearer Raila Odinga.

In his recent meeting with the European Council in Kenya, the DP complained that about one million voters from his stronghold had been deleted from the voter registrar. However, the commission expressed confidence in IEBC to deliver a free and fair exercise.

At the same time, the commission has updated the country on the status of the Register of Voters.

IEBC Chairperson Wafula Chebukati said that after KPMG’s audit of the Register of Voters, the preliminary report indicates that there were 246,465 deceased voters and 481,711 duplicate records.

Also, 226,143 voters registered with IDs that don’t validly belong to them, 164,269 registered with voter records with invalid identification documents (IDs and Passports) that have to be addressed prior to certification and publishing of the register.

The commission said that it is scheduled to receive the final audit report on June 16, and thereafter engage stakeholders on the final register of voters on June 17. It will then address the findings prior to certifying the register for publication on/or before June 20.

Only four candidates have ben cleared by the IEBC in the presidential race. Other than Dr Ruto and Mr Odinga, the other two are David Mwaure Waihiga (Agano Party) and Prof George Wajackoyah (Roots Party).

What Kenyans are most worried about ahead of August polls