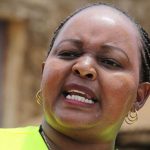 Kirinyaga Governor Anne Waiguru has responded to a move by the Ethics and Anti-Corruption Commission (EACC) to have her blocked from running for office in the August 9 General Elections.

Ms Waiguru, who will be seeking a second term as governor, has been listed by the anti-graft commission among 241 politicians with questionable reputation.

On Wednesday, the anti-graft  body wrote to the Independent Electoral and Boundaries Commission (IEBC) seeking to have those in the list blacklisted from running for political seats.

According to the commission, there are court cases involving Ms Waiguru that are yet to be determined, hence her unsuitability to run for the elective post.

“The Commission received allegations that the aspirant abused her office by irregular receipt of travel imprests amounting to Sh10,634,614 for trips that were non-existent or not official. The investigation established culpability on the part of the aspirant and a recommendation to charge was made,” EACC said.

But Waiguru has responded by accusing the commission of acting on orders from the Office of the President.

“Were it not for constitutional safeguards that separate investigations, prosecution, and adjudication, EACC on behalf of their Harambee House masters would have hanged some of us for moving to UDA,” Waiguru tweeted.

The governor also accused EACC of acting on rumours and “cooked stories” without the need of a trial.

“Fortunately culpability under our law is determined on the basis of evidence, and not by them. Trying to manage electoral issues through institutional State capture won’t cut. Not in Kenya!” she said.

Ms Waiguru will be seeking a second term under the United Democratic Alliance (UDA) party led by Deputy President William Ruto who is running for president.

She is facing stiff competition from Kirinyaga Woman Representative Wangui Ngirici, who will be running as an independent candidate.