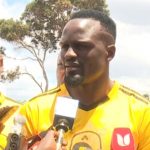 Former footballer McDonald Mariga has accused rival goons of attacking him while he was on the political trail.

Mariga who is vying for the Kibra parliamentary seat says the goons attacked and injured him. He’s asked police to investigate the incident and arrest the perpetrators.

“You see they have broken my hand but they will not intimidate me,” he said, in a video obtained by Nairobi News.

“We’ve been doing peaceful campaigns here, but there are some ODM and Azimio politicians who are sending young people to injure me. I have made a report to the police station and we will ensure these people are arrested and jailed.”

Mariga also claimed his vehicle was vandalized and some of his women supporters sexually harassed.

“This is not the Kibra we want,” he added.

The politician did not, however, share proof of how he knew his attackers.

Mariga has, however, vowed to continue with his campaigns despite the setback.

“If they think they will intimidate me by beating me and my supporters they are wrong. We will campaign even harder and have set our eyes on the prize.”

It is the second time in three years Mariga, one of Kenya’s most successful footballers, is vying for the Kibra seat. He is vying on a United Democratic Alliance (UDA) ticket.

Remembered for winning the Italian league, Coppa Italia trophy and UEFA Champions League in the same season while playing for Inter Milan under famed coach Jose Mourinho in 2011, Mariga contested for the Kibra seat in the 2019 by-elections following the demise of Ken Okoth.

Despite putting up a sustained campaign with help from Deputy President William Ruto, he lost to Imran Okoth, the deceased politician’s half brother.

He was also attacked by goons during the campaigns in 2019 and reported the matter to the Police.