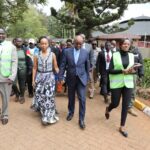 There was drama at the Independent Electoral and Boundaries Commission (IEBC) offices at the Bomas of Kenya when a protest speech by Jimi Wanjigi’s cut was short after his microphone was switched off.

Wanjigi, a prominent businessman and political broker, was protesting the decision by IEBC to reject his application to vie for the presidency in the August 2022 polls.

He had sought to vie on a Safina party ticket but IEBC chairman Wafula Chebukati rejected his application on the basis he did not have a University degree.

“A degree certificate is mandatory and due to that, I am rejecting your application to be nominated as a candidate for the presidential election slated for August 9, this year. That is my decision as the returning officer for presidential elections,” declared Chebukati.

This is after the tycoon tabled his academic transcripts without a degree certificate.

Nairobi News understands he is scheduled to graduate in December of 2022.

But Wanjigi maintained Chebukati’s decision was arrived at out of malice.

“This exercise had been decided from somewhere else and I will not be afraid to say that before you chairman,” said Wanjigi amid cheering supporters.

IEBC Chair Wafula Chebukati aliamua kuzimia Jimi Wanjigi microphone after the later failed to meet the IEBC clearance requirements. Instead of complying, Jimi descended into threats which the chair could not fathom pic.twitter.com/sBrHpwkOVw

Chebukati took over, asking Wanjigi to wind up his speech.

“Please finish up or you can go and address your supporters from outside,” the IEBC chair said.

Wanjigi protested, asking for more time to express himself.

Chebukati though, was having none of that.

Suddenly Wanjigi’s microphone was switched off and he could no longer be heard.

He returned it on the table and walked out.