Wetangula: Why I am defending Senate seat despite Ruto offer

Wetangula: Why I am defending Senate seat despite Ruto offer 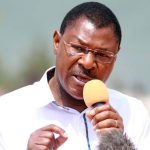 Moses Wetangula is under scrutiny for choosing to defend his Senatorial seat despite being promised a senior national post by Deputy President William Ruto.

Among those who have criticized the move is the Bungoma Senator’s political rival Mukhisa Kituyi who argues Wetangula’s decision is proof he doesn’t believe William Ruto will win in August 2022 polls.

Wetangula, a renowned lawyer and seasoned politician, is said to have been promised the National Assembly Speaker position in the event Ruto triumphs in the polls.

Speaking at an Azimio rally in Bungoma, Kituyi called out the Ford-Kenya party leader for his actions.

“Let me ask you our people,” explained Kituyi.

“Wetangula told us has been promised a position by William Ruto but today at 6am he was at the IEBC submitting papers to vie for Senator.”

“If you have believe Ruto will win and give you the powers, why are you looking to vie for senatorial seat, I was going to vie for presidency but I had a talk with Raila Odinga and dropped my bid because he told me we will work together, and I accepted it I will not be looking for another alternative because he will win.”

Earlier, Wetangula attempted to justify his decision to vie for the Senatorial seat for the third successive time.

“We have been promised 30% of government seats should we win in the elections,” he said.

“Out of 22 Cabinet Secretaries, we (Amani National Congress and Ford-Kenya parties) will have six ministers, three for each party. So I’m not fighting for myself I’m satisfied with humility within this status as the senator of Bungoma. I am not a selfish person, and I am not about individualizing myself in this alone, to all of those who that will be lucky to get the minsters job we will still be part of a bigger family of Ford Kenya.”

Known as Papa wa Roma in local political circles, Wetangula will be going head to head with current deputy governor of Bungoma, Professor Ngome Kibanani, a first timer vying under the Democratic Action Party of Kenya (DAP-K) ticket in the August polls.