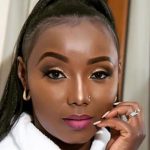 Kenyan actress Catherine Kamau has defended her absence at Rihanna’s Fenty launch after she shared photos on her Instagram having attended the L’ Oreal beauty launch instead.

In what the actress earlier termed as a ‘conflict of interest’ turned out to be more than just that as she now says the real reason she missed out on the Fenty launch for commercial reasons.

The actress caused quite a stir online when she showed up for L’Oréal Paris high tea launch party barely a day after she made it public that she failed to attend Fenty Beauty’s launch due to a conflict of interest.

Both L’Oréal and Fenty are international makeup and skincare brands and serve the same purpose, and many of Kate’s social media friends couldn’t help but ask the actress why she opted for L’Oreal.

A fan by the name of Auma Ochieng wrote in the comment section saying, ” Sasa Fenty na L’Oreal kuna difference gani? ( Honestly what is the difference between the two brands) Si ungeenda tu ya Fenty at least you could have shown them how to turn up to such events.”

Kate then simply responded by saying, ” L’Oréal has paid me!”

Pressing on, the fan went on to ask the entrepreneur about her newly launched cosmetic brand ‘House of Humba’ saying, ” Thought it was about putting House of Humba Cosmetics first… Anyway.”

Kate, however, did not offer a response.

Previously, Kate had tweeted hinting at missing the Fenty launch as she had just launched her own ‘House of Humba’.

She wrote, “Not me missing Fenty Launch because of conflict of interest. I mean, is House of Humba Cosmetics a joke to you?”

The former mother-in-law actress had also shared another post where she encouraged artists in all crafts generally to have standards and be proud once they rise in the ranks.

She wrote, “The only time you attend free gigs is when you are starting out because you need them to network, learn the ropes. Ukiiva ringa nani!”

Actor Madiba opens up on losing dad at ‘critical’ time