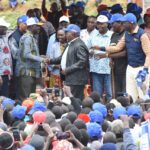 Kipruto arap Kirwa says he dumped Deputy President William Ruto in favour of Azimio presidential candidate Raila Odinga because of what he described as a lack of democracy within the United Democratic Alliance (UDA).

Specifically, Kirwa, a former Cherangany lawmaker and Agriculture minister claimed he was far from satisfied with the way Ruto picked Rigathi Gachagua as his running mate.

“That (decision) shows there’s no democracy in UDA,” the seasoned politician told a mammoth rally in Bungoma County.

“I decided to come here to Bungoma and tell you I have confidence in Raila Odinga and Martha Karua. You are my neighbours and it is important I assure you we will work together.”

Until he quit, Kirwa was UDA’s vice-chairman.

Kindiki is said to have been the favourite of all Ruto allied lawmakers only for the second in command to decide otherwise in his decision making.

Gachagua, in a previous radio interview also conceeded he knew his appointment was not received well in most quarters but added that he ‘did not pick himself’.

“Last night, I called Martha Karua to ask where she will be today (Sunday) and she said she will be in Bungoma and Bungoma is the neighbor of Trans Nzoia where I stay. From today (Sunday) I Kipruto Kirwa, I have resigned as vice chairman of UDA.”

Ms Karua, who came with Mr Kirwa, described him as a dedicated leader who has always championed the well-being of Kenyans.

“I know my brother Kipruto Kirwa as a hardworking person. We were with him in Kibaki government and he was in charge of Agriculture,” she said.

Defence Cabinet Secretary Eugene Wamalwa on his side said Mr Kirwa joining Azimio is a clear indication that they are winning the August 9 polls.